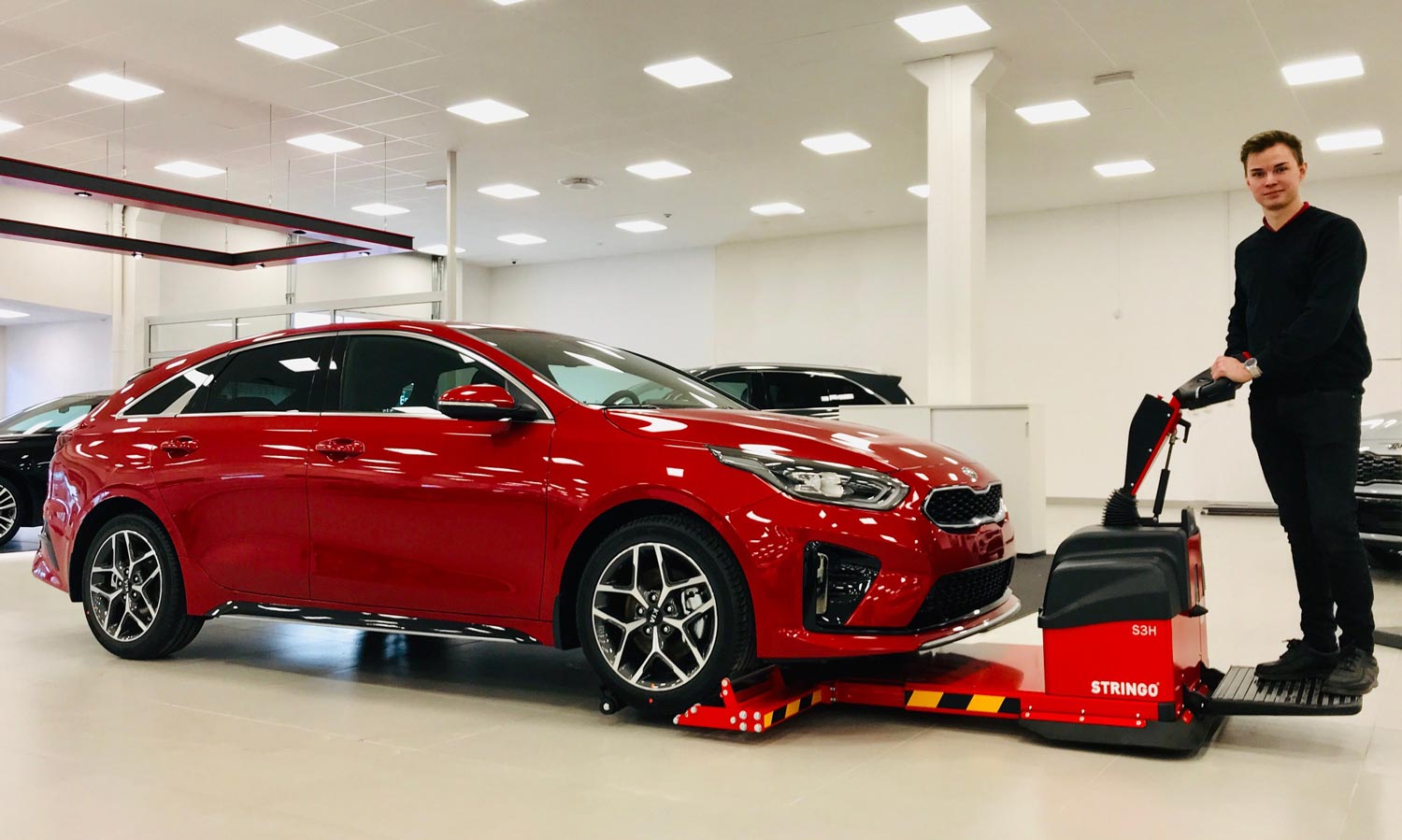 Sundströms Bil in Kramfors is probably Stringo’s closest customer. When the long-established family-owned company moved to their grand new premises, they purchased their first Stringo.

“We purchased it because we had relocated to larger premises and wanted to avoid starting the vehicles indoors. Previously, we drove the vehicles in and out, but we now have everything under one roof and it’s really convenient,” says Mattias Bergström, Showroom Manager at Sundströms Bil.

Like Stringo, Sundströms Bil is a second-generation family business, which has been operating in Kramfors since 1971 and is Norrland’s largest Kia dealership. The new premises boast a 1,500 m2 showroom.

“Moving to the new premises has proven to be a huge boost for us. Since we have a much larger showroom, we now have more vehicles, which means moving more vehicles every day. With a Stringo it’s easy to move the vehicles between the car wash, auto detailing, the new car showroom and the pre-owned showroom,” says Mattias.

It all started when Sundströms Bil borrowed a demo to try out for a month.

“But we realized quickly that we would not be able to cope without it! We now have the S2 and it works as we expect.”

Mattias first received a walkthrough with the Stringo staff who delivered the vehicle mover, after which he got to try it out himself.

“After 25 minutes it felt natural to operate. Stringo is user-friendly, and the fact that you learn quickly how to operate it testifies well to this. I have taught most the personnel here to use it as well.”

Stringo has become an indispensable tool for Mattias and his 15 colleagues in their workday.

“It saves time since moving vehicles with it is quick and easy. In the past, it took two people to park a vehicle and get it straight. We devote a lot of time to making the showrooms neat and orderly. Now I can move the cars in on my own and park them neatly,” says Mattias.

The work environment has also improved in other ways.

“There’s a big difference now in terms of air quality. In our old premises, my workstation was in the middle of the showroom, and it was noticeable in the air when we started a few cars and I had to sit there and work.

“I would absolutely recommend Stringo to others.”

It seems that Stringo has itself become a topic of conversation with customers.

“Most people who come in are curious about Stringo and ask about it. And you also get a lot of smiles and cheers from customers when you ride past on it. They think it’s very modern, and there’s a sense of pride that it’s developed and produced here in Nyland,” says Mattias.

Mattias is also very pleased with the contact he has with Stringo.

“I’ve been in contact with both the servicing and sales departments and they are always on call. Staff from the servicing department have also visited us here to make sure everything is functioning. So it works really well,” concludes Mattias.