Stringo S3 in the new season of Graveyard Carz 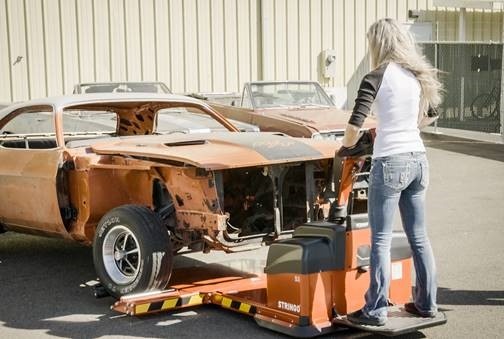 The sixth season of the popular television show Graveyard Carz begins in the USA in November. We follow Mark Worman and his employees as they restore old US muscle cars to their original glory.

Since September of this year, they have used a Stringo S3 in the workshop.

Space in the Graveyard Carz workshop is at a premium. They need to find room for cars in all manner of conditions and various phases of restoration, together with equipment and an entire film crew.

The workshop specializes in restoring cars from the 50s, 60s and 70s. That means that lots of different models of cars are competing for space. They change places and are moved around, often relatively long distances. For this reason, an uncomplicated solution is needed for moving vehicles around indoors.

Stringo's vehicle movers have been used in the workshop since the end of 2014 and, in September 2016, a new Stringo S3 was delivered and will be seen in the upcoming season of the show. Thanks to Stringo, it is simple and convenient to change the cars' places according to what work needs to be done and what is due to be filmed. The new Stringo S3 provides the operator with a good overview and features the optimal setup for the smooth and safe maneuvering of the vehicle to its new location. The Stringo S3 vehicle mover also has a 15 percent higher battery capacity and a more energy-efficient motor, which makes a difference when working long hours on the machine.

In a teaser trailer for the sixth season of Graveyard Carz, we see Allysa Rose maneuver the workshop's new Stringo S3 vehicle in the shop's yard, http://bit.ly/2f8Tx4Z